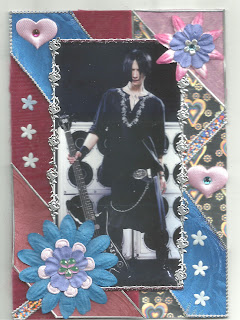 Yesterday I was angry, and decided to use the "horsepower" of my wrath. I am happy with how this one turned out; pity the scanning does not do justice to the colours...
While working on it I was listening to this fantastic song. Special thanks to my friend Manolis for giving the album to me.

Posted by Elizabeth Vasilaki at 02:08 4 comments: 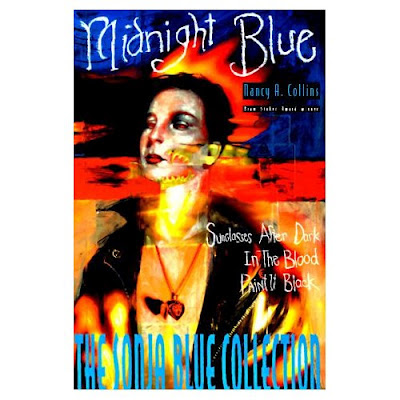 The past few days have been weird. I continuously feel like I am walking around with my head half submerged in water. To be more exact, in water full of weird chemical substances. Unable to do anything that needs the least bit of concentration, I keep reading books. I finished some books that I have had in my possession for years now. One was a very nice collection of three Sonja Blue novels by the writer Nancy A. Collins, called ‘Midnight Blue’. All in all, a very good trilogy. Nancy Collins has a complete map of her world in her mind, full of supernatural beings, each with their special characteristics and kinks, living in a modern day urban fantasy environment.  The basic character is Sonja, a beautiful and independent vampiress and vampire hunter. Armed with a silver switchblade, hidden behind her mirror sunglasses, she brews trouble everywhere she goes and leaves nothing but corpses and broken hearts in her wake.

Nancy Collins is very eloquent, with detailed descriptions that never become boring, and also not shy about describing some controversial and sensitive themes like sex, murder and exploitation, religious and otherwise. Sonja walks the ugliest, dirtiest, seediest places downtown and the reader sees the world through her cynical, supernaturally attuned eyes. It’s a grotesque yet fun ride. The end of the third book is a bit too grandiose for my standards, but what the hell, why not. It fits well. Anyone looking for something different than Twilight or True Blood is welcome to try Mrs Collins.

I also re-read a collection of short stories by Stephen King, called “Everything’s Eventual”, that I got for free from bookmooch.com  I am a fan of Mr King. He’s one of the easiest writers to read. He’s funny, he’s scary, has a knack for coming up with the unthinkable or at least, the improbable, and knows human nature well enough to be realistic without being too cynical and sweet without being melodramatic. His short stories are collections of fascinating odds and ends, of people who have just snapped or are facing the most bizarre situations, sometimes due to their previous choices, sometimes just because. He’s good enough to lull you and lure you in the story without insulting your intelligence or making you stir once. By the time you know what’s going on it’s too late already, you’ve found yourself in places you never meant to go to begin with, and all you can do is enjoy the ride.

I have two personal favourites. The one that gave its title to the collection, ‘Everything is eventual’, is a story of a gifted young man that is recruited to use his special gift “for the general good of all.” But what exactly could this mean when the young man’s gift is the ability to kill from a distance? Wary yet?  Believe me, you should be. And what about that other poor fellow, the one his wife left without an explanation? Not something that unusual, I know. But on top of that our friend decided to quit smoking too, and now he’s about to meet his ex and her lawyer in a restaurant, fighting both his feelings for her and his nicotine addiction. Whoops. Someone in the equation is far from stable, and they are all about to find out, at the ‘Lunch at the Gotham Café’. Nice!

Both books highly recommended.
Posted by Elizabeth Vasilaki at 11:17 No comments: