After long conversations with some of my swappers, I decided to post photos of some examples of friendship book categories. Please keep in mind that this post illustrates my opinion. It is not a universal guide and is not meant to make people feel bad. Categorisation is done strictly based on the amount of time and the degree of complexity. To say that an fb is Nice and Neat it does not make it ugly, or worse than a High Quality one. Just less complex and with less decoration.

Let me begin by showing what I would categorise as 'neat', one step up from regular fbs. Neat fbs are in booklet form but the cover is either kept undecorated, or decoration is very minimal. Usually stapled, but sometimes held together by ribbons. Sometimes they are taped (covered with plastic), sometimes they aren't. 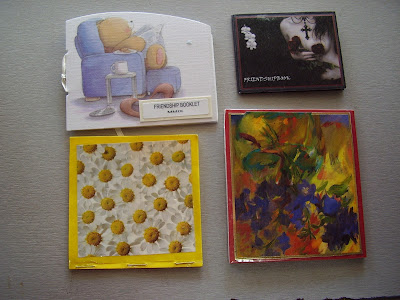 Next category are the nice and neat. They are in booklet form, with decorated cover. There usually have at least two to three layers of decoration. The cover of the fb is one layer, the picture a second and any additional decoration (glitter, confetti, border stickers, ribbons etc) a third. They are taped and they can either be stapled, held together with ribbons, or eyelets. 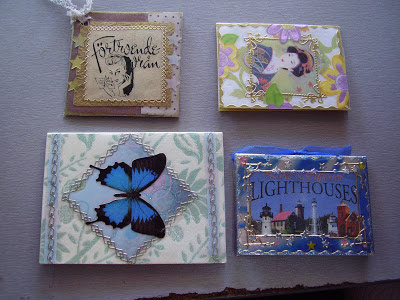 The next category is an awkward one. The lines are very foggy. Most swappers don't see a category between High Quality and N&N but I (being OCD) have one. I call those fbs high neat. They are more decorated than N&N but still not HQ. Again, booklet form, taped, at least three layers of decoration, may be held together by staples, ribbons or eyelets. The majority of people does not see that category;  they consider anything more complex than N&N to be High Quality. Also, two different people may have different opinions on what the same fb is, depending on their decorative style and personal ability.


Halfway between N&N and HQ: 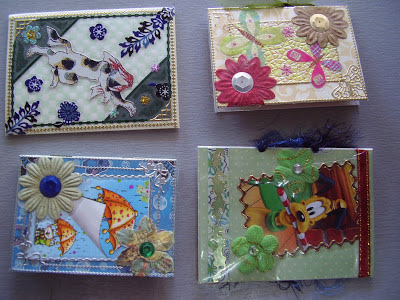 Next category is High Quality. We're talking about taped fbs in booklet form, pages strictly tied by ribbons or eyelets. No staples in HQ fbs. Also, the decoration is at least four plus layers of material, including mulberry flowers, different papers, border stickers, ribbons and so on.

(Sometimes I see fbs that the owner has decorated the cover enough to cater for HQ but has used staples. Personally I have no problem with staples, but all the yahoo! groups that swap HQ fbs do. Any objections should be discussed with them and not with me. :D) 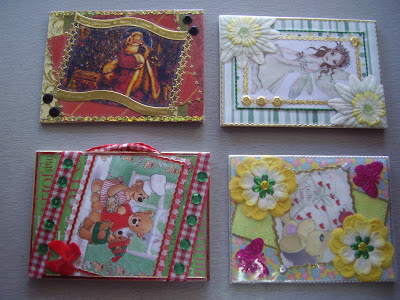 Heyyyy! Wait, don't go yet. There is one more category in the game, what I call VERY High Quality. Those ones are created by lunatics like me. Take the definition of HQ and take the madness one step further. 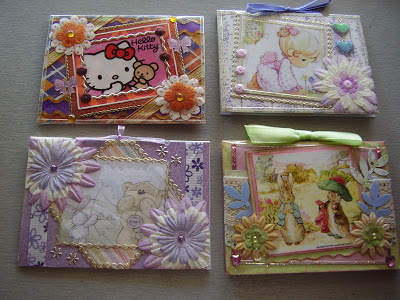 Some of them have six or more layers of material. People are crazy. I am crazy, too, but it's harmless, and they are like little works of art. You really have to admire that.

All fbs shown here are taken from swaps I received recently. None of them is something I have made.

Usually to avoid arguing with my swappers on what is or what isn't HQ and why I just make sure to match their swaps in quality and quantity. This pretty much keeps everyone happy and me away from pointless argumentation. :)
Posted by Elizabeth Vasilaki at 11:25 2 comments:

(I know, I know. Reviews must not stray into libel. God/dess help me I will try, but I don't think I'll make it.)

I suppose that everyone that knows me knows about my love for the vampire genre. Well, I was given this series to watch. It's super popular, it has beautiful protagonists, and I can't think of anything else positive to say.

Let's start from the beginning:

I have seen only two episodes from the first season. The whole experience is so painful and mind boggling that I have to keep myself from pressing the stop button several times during each episode. That without referring to the keen sounds of despair and exasperation I emit without realising it. The neighbors certainly believe I torture my cats. Subsequently I cannot give the polite reader information on how the series develops plot-wise (plot? what plot? Is there a plot? ha ha, seriously?) and so on, because obviously I have not watched it. And I don't think I will. To be brutally honest, if it continues in a similar manner, I would rather head dive eyes first on two wickedly sharp pencils. Repeatedly.

So, the series is super advertised and all three protagonists are very good looking. They are also surrounded by a variety of other (two dimensional) characters. Did I say this? Yes I did. Here are some examples of the kind of advertising that promotes the series: 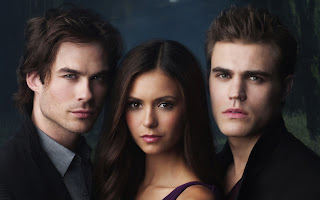 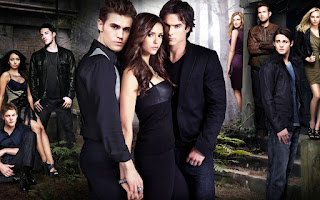 I take my shovel out and begin.

Vampire diaries is about a high school girl (Twilight) whose parents have died in a car accident in a lake (True Blood) and has a useless brother who's a drug addict (True Blood). Suddenly a mysterious stranger appears in her school and she becomes his sole interest (Twilight). I know you would never believe it but this stranger is a vampire who does not drink human blood (Twilight). He can also walk in the sunlight (Twilight) due to a terribly kitsch ring that is a family heirloom. The female protagonist has a beautiful black female friend (True Blood) and keeps a diary. (We can safely claim that this is a breakthrough! This does not happen in either True Blood or Twilight. Hooray!) But things are not as happily-ever-after as they seem, for the mysterious stranger has a brother, who is also a vampire, and he is so bad and mean his sole reason of existing is making the good brother's life an unbearable misery and killing humans. And of course, he's got his sights on the beautiful female protagonist as well.

(I should point out at this part that my friend V. tipped me to the fact the books the series is based on were out before Twilight or True Blood. Which means, that Twilight and True Blood have taken loans from Vampire Diaries and not the other way round. But for someone like me who has not read the books, I just see the same plot elements repeated over and over again. And that pretty much kills the excitement...)

If you look at picture number one, the bad brother is on the left and the good brother on the right.

The so-called good brother, Stefan, is one of the most emo, pathetic, spineless and creepy characters I have come across. In the first episode alone he stumbles upon, appears at the door of, and otherwise stalks the female character Elena at least four to five times in one day. She does not find this at all strange, by the way. He is weak because he does not drink human blood and so cannot fight his evil bother who habitually goes around beheading people as if they are Pez dispensers. But he will not consume human blood because he is so genteel. Woe is me. My heart goes out to this gallant knight of midnight, wearing heavy military boots to kick his tragic, miserable ass.

The bad brother, Damon, is a worse caricature that Wile. E. Coyote. He's hysterical, two dimensional, unrealistic and irritating. He somehow possesses all the terrible character qualities a spoilt princess of a schoolgirl would possess and the exact same shrill repertoire. He only exists to be a counterweight to the good character, which means, both characters are either absolutely black or absolutely white. The relationship reminds me of those families with two children that one of them is the parent's favourite and the other just has to suffer silently whatever the favourite one comes up with or dishes out. Ever seen the kind of child that throws tantrums in public places and shrieks because things did not go their way? Well, imagine that in the body of someone in their early twenties that kills people for food and recreation.

The first two episodes consist of people wandering around aimlessly, murders in the exact same aesthetics and tradition as most brain-dead American movie series like Scream, the gentle stalker, the jealous mean brother, and several other so-called characters, including a girl whose memory is erased and re-written more times than that of a tape in an answering machine. Of course, it's all very romantic, exciting and meaningful, like the man with no ass on his visit to a proctologist. One keeps having the impression that they have seen the same scene before, and they have, because lack of plot makes everyone go around in circles with nothing more productive to do. Other than that, it's a wonderful series, full of excitement, plot, characters... oh wait, wrong series review, I was referring to 'Lie to Me'.

My friend K. tells me it becomes better after the third episode. I feel like I have developed hemorrhoids inside my brain after watching just two. I want to die. Just want to die. I can't take it anymore. Pieces of rotting brain are falling off from my nostrils every time I see ten minutes of it. Mercy, Lord. Whatever it is that I did, I repent. I have started watching an ancient TV series called 'Kindred: the Embraced' to wash off the taste of Vampire Diarrheas. Compared to the previous I feel like I am watching high culture.

I may watch one or two more episodes to kill a few more valiantly resisting braincells. And to make sure this review is just to the series. But perhaps I should not, because if the brain damage continues, who will spoon feed me and change my diapers for the rest of my life? I fear that option. I truly do.

I'll brace myself and sacrifice more of my brain.
Posted by Elizabeth Vasilaki at 08:17 No comments: